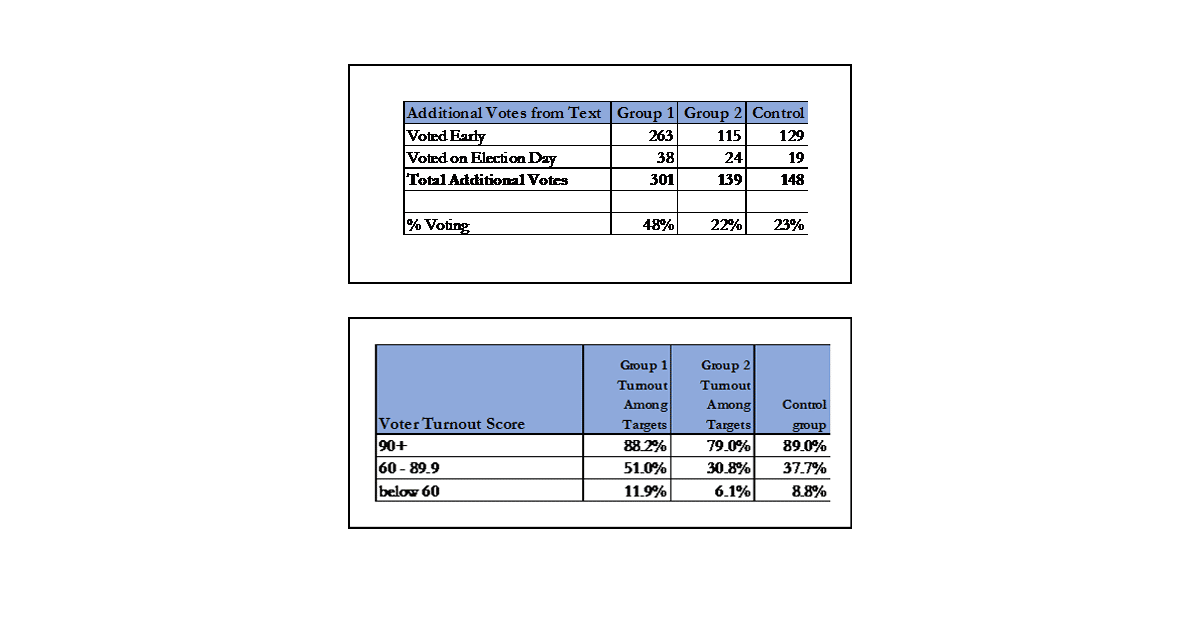 In early June 2019, Eric Johnson was elected Mayor of Dallas. His victorious campaign to lead America’s ninth-largest city was remarkable for the absence of TV ads, digital video or radio ads. The old-fashioned combination of field, phones and mail paved the way for victory in this low turnout election. But there was at least one new wrinkle in the campaign playbook—social pressure texting. In the end, more than 3% of Eric Johnson’s margin of victory came from this small texting program.

Just six days before the first election we texted 631 previously identified supporters (by phone or canvass) who had voted early. Each of these Eric Johnson supporters who had done their duty had at least one person living with them who had not voted early as of the day before. We asked the person we texted to nudge a specific person we named in the text to go vote. In those cases where there were multiple targets in a household, we mentioned the person with the higher turnout score. (There were a total of 1,166 people on the target list in these households, so most households had two or more people who had not voted early.)

Two days later we texted this universe again with two versions of a text: Version A thanked those who had convinced their family member living with them to go vote early and urged them to ask other (unnamed) family and friends to vote early before the deadline. Version B was a reminder to those who had a family member living them who still had not voted early, asking them to make that second reminder.

15% improvement in turnout among slackers who are mentioned in a text to a supporter who has already voted.
Simply texting a supporter who had voted early asking her to nudge some unnamed family member or friend doesn’t have an impact.
The impact of the text is greater on the slacker voter in the middle range of the turnout index–not much lift for super voters and almost no lift for the infrequent voter.
If the “slacker” doesn’t vote during the early voting period after the text to another family member who has already voted, he is less likely to vote at all.
Implications for Campaigns

Rolling Text Program. Campaigns in early vote jurisdictions with reliable daily reporting of ballots received would do well to start early with a rolling pattern of texting to supporters who vote early and live with family members who have not yet voted. This gives more time for the supporter to nudge the family member into action.

Early Vote Period Behavior Is Telling. If at the end of early voting a family member of a person receiving this texting program has not voted, campaigns with lots of resources can drill down on this “problem voter/likely supporter.” Otherwise, campaigns with limited dollars would be wise to scale back their turnout projections to account for these very unlikely voters on Election Day and possibly trim final mail and live phone programs to omit these longshots.

48% of those voters we “called out” in our texts to their family members who had voted early actually went to the polls. Most did so in the remaining days of early voting. This was a 15% turnout boost over the control group.

There was no lift from texting a supporter who had voted early and simply asking them to get a “family member or neighborhood friend” to vote.
The impact of the texting program had no impact among super voters—they voted at about the same proportion as the control group whose family members go no text. However, with voters in the 60 – 90 turnout range, the lift was 13.3%. And for those unlikely to vote in this election, the texting program generated a very modest 3.3% improvement in turnout over the control group (to a total of 11.9%)

previous
Texting, List Quality And Voter Pushback
next
Our Take On The August 2019 Partisan Primaries
(601) 499-4162
info@chismstrategies.com