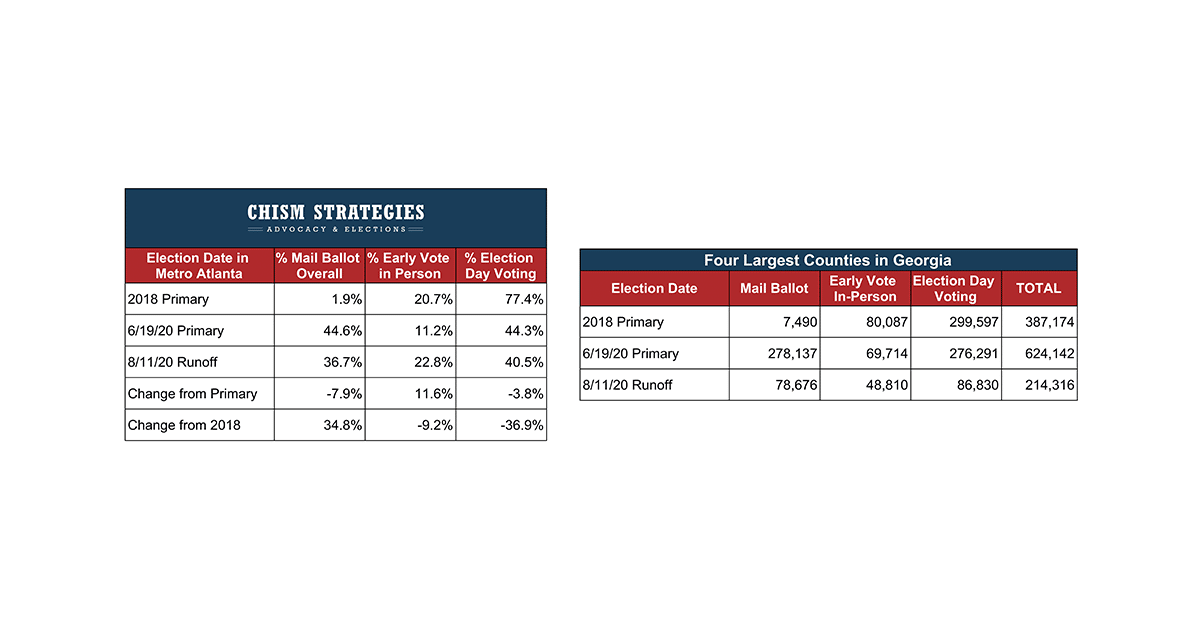 As polls continue to reinforce the notion that Georgia may soon be a “Purple State”, we look to metro Atlanta for clues about voter turnout this fall. Tuesday’s runoff election results in the state’s four largest counties– Cobb, Dekalb, Fulton, and Gwinnett prove useful.

The Vote-By-Mail Surge Is Driven Largely By the Ease of Ballot Access
In the primary, the Secretary of State sent absentee ballot requests to every voter, and Georgians took advantage. The share of mail ballots in metro Atlanta grew from 2% of total in 2018 to 45% in the 2020 June primary. This was a 37 fold increase, going from 7,490 in 2018 to 278,137 in the 2020 primary.

However, in the runoff, the Secretary of State did not send a mass mailing of absentee ballot requests and the mail ballot share of the total vote fell to 37% overall in Metro Atlanta.

The Early Vote Share of Total Votes Cast Continues to Grow
Overall, 56% of votes in the Metro Atlanta primary and nearly 60% of votes in the runoff were cast early, either by mail or in-person, an increase from 23% in 2018.

In the primary, 11% of voters in the four largest Georgia counties cast a ballot early and in person (rather than by mail), a drop from 21% four years previous. But when mail-in ballots became less convenient in the runoff, the share of ballots cast early in-person bounced back to 23% of the overall total.

Given fears about exposure to coronavirus and problems we’ve seen with election day voting this cycle, we can expect to see similar increases in the early vote in other states. Campaigns would be wise to adjust their plans accordingly, recognizing that the window for persuading voters will be much shorter in 2020, and a larger share of GOTV will happen in September and October compared to previous cycles.

As more results come in, we will continue to dig into this data, looking for any trends (demographic, geographic, etc.) that can give progressives an edge in November.

previous
Values and Political Persuasion
next
Telephone Town Halls During Covid-19: Getting Behind The Numbers
(601) 499-4162
info@chismstrategies.com