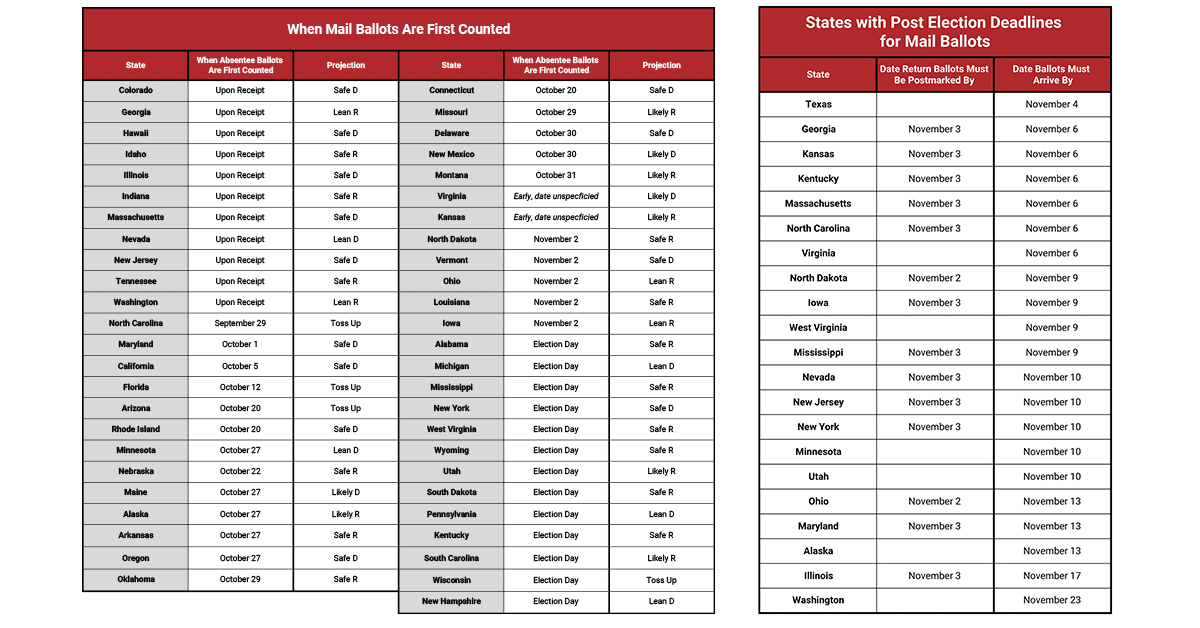 In an election cycle with so many unknowns, we can make two predictions with confidence: a) Vote-by-Mail will reach record highs and b) Mail-In Ballots take a long time to process.

There are several quality essays and TV news accounts explaining why Trump might declare victory on Election night with an actual Biden/Harris victory finalized days, and possibly weeks, later.

Less has been written about how mail balloting will impact the timeline for calling other key races this fall. Here is what we know:

Thirteen states do not begin counting absentee votes until Election Day and another five do not begin counting until the day before. These include states with potentially competitive Senate and House races, including Alabama, Iowa, Michigan, New Hampshire, Ohio, Pennsylvania, South Carolina, and Wisconsin.
Twenty-one states do not require that ballots arrive by Election Day, pushing the final results back even further. In Washington, the deadline for ballots to be returned is November 23rd, so the final results in the Evergreen State might not be known until around Thanksgiving. But of more importance, several swing(ish) states with competitive down-ballot races will not finish receiving mail-in ballots until a week or more after the election, including Alaska, Iowa, Nevada, Minnesota, and Ohio.

Even with an early election date this year, political observers should not expect to know with certainty the fate of the House and Senate until mid-November, if not later.

The good news is that several important swing states — including the crucial state of Florida — begin counting their absentee votes in mid-October. That should give us some indication of what is to come on election night.

previous
Telephone Town Halls During Covid-19: Getting Behind The Numbers
next
2020 Turnout Surpasses All Elections Since 1908
(601) 499-4162
info@chismstrategies.com